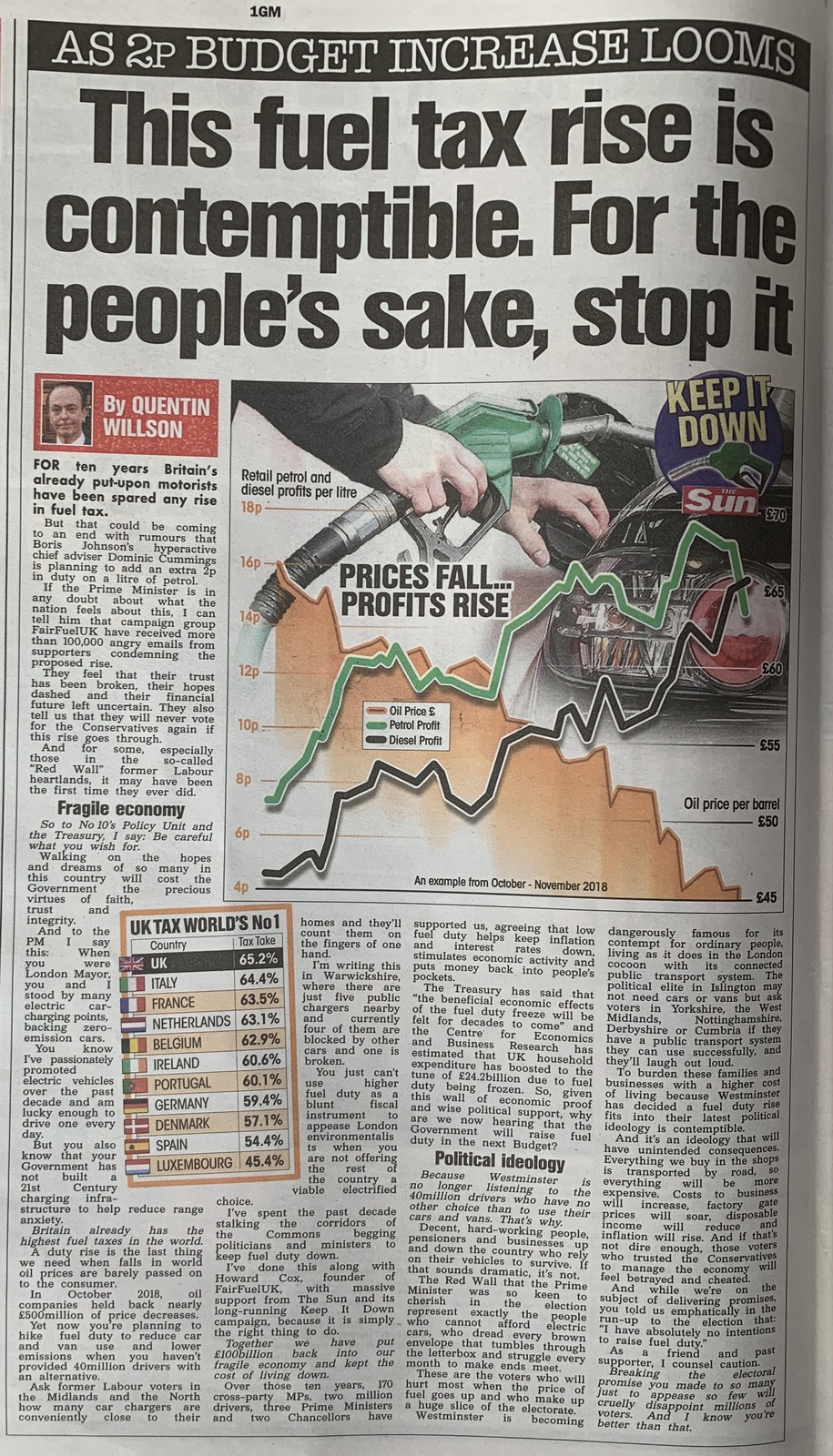 UK Drivers are STILL the highest taxed motorists in the world 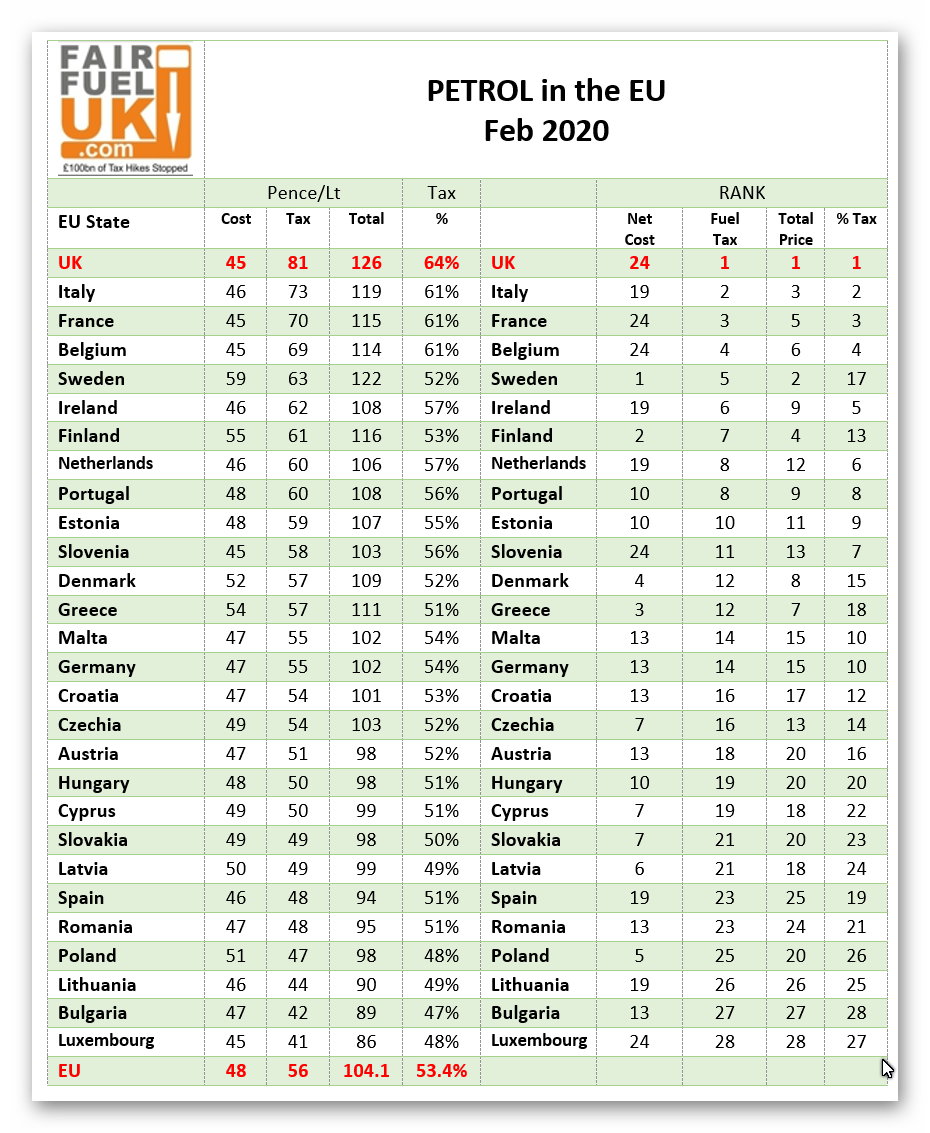 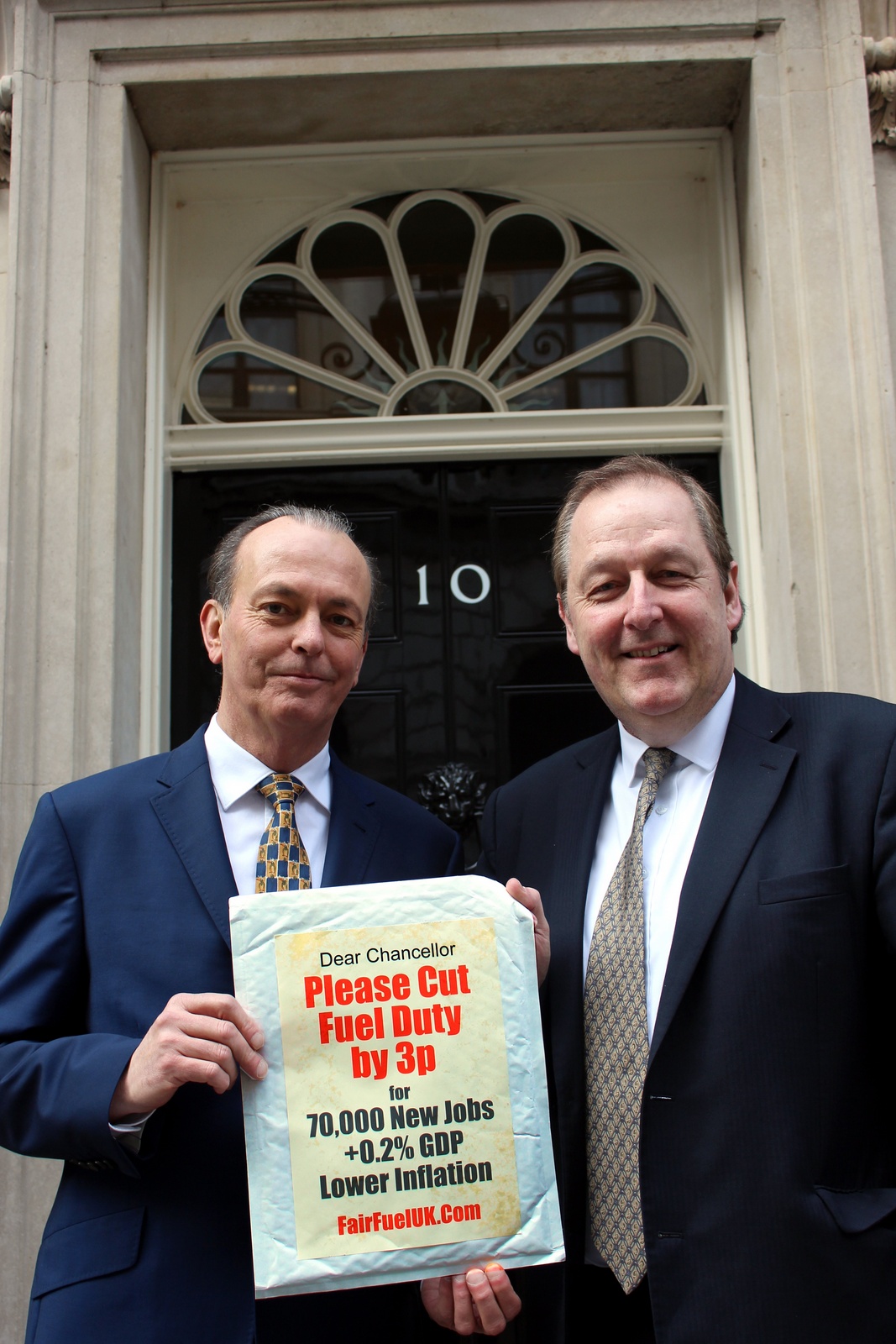 4. The yearly impact of higher inflation across all of this, would have eventually reached £14.5 billion per year, in funding all UK’s outstanding government debt. That’s over £116bn in cumulative debt funding costs over 8 years.

5. The CEBR estimate that household expenditure is £24.2 billion higher per year due to fuel duty being frozen. This equates to approximately 1.21% of total GDP.

The True Price of the Fuel Duty Freeze

So, what is the real cost of the freeze in fuel duty since 2011?

Had the fuel duty escalator continued as planned from 2011 onwards, this levy today would be 83.33 pence per litre rather than 57.95 pence per litre, 43.8% higher. And please don’t forget the repugnant VAT on the duty itself. That would have meant current pump prices being around £1.70 plus.
What would that cost of filling up done to our economy, our vital small industrious businesses and more importantly, those real people who are ‘just about managing’? Words such as recession, struggling, debt and bankruptcies would be words littering the media’s airwaves and newspapers alongside Brexit.

So, FairFuelUK with its founding backer, the Road Haulage Association, commissioned the much respected and Government used independent economists CEBR, to delve into the legitimacy of Hammond’s declarations.

The CEBR’s task was simple, to examine the claims championed by out of touch Ministers, that the economy and those led by Number 11’s current occupant, they have been fiscally pickpocketed by not increasing fuel duty since 2011.

Based on CEBR’s dynamic modelling and recognised by the Treasury, the self-wounded Chancellor’s alleges could not be further from the truth.

Had the freeze not occurred, the fuel duty escalator’s impact on CPI would have reached 6.7%, creating major inflationary pressures in the UK.  It is now 1.6%!

Due to fuel being such an important input to manufacturing, the magnitude of these costs if there had been no hold on fuel duty, would have been 20.3% in 2018, compared to the actual yearly rate of 8.7%. So, by not having a freeze in fuel duty, the ensuing sky-high business costs could have led to a significant increase in the production overheads for manufacturing firms, potentially harming their underlying profitability and competitiveness.

A very similar effect is found in the service price indices of road freight, generating an impact of 5.14% due to the fuel duty escalator not being frozen. This was attributed to the use of fuel for the service of transport itself. These firms would have had no option but to increase their prices to their customers, who in turn would pass their costs onto consumers.

This perceived loss in revenue to ‘Spreadsheet Phil’ the last Chancellor appears like a large sacrifice, but in fact, it is offset by other critical influences, he totally discounts. More specifically, had the fuel duty escalator driven up UK inflation, that would eventually come to impact on the UK funding costs on the £1.8 trillion of gross UK government debt.

The yearly impact of higher inflation across all of this would have eventually reached £14.5 billion per year, in funding all UK’s outstanding government debt.

Likewise, this impact reaches beyond government revenue. The impact of higher inflation on real household expenditure is substantial. Real incomes are eroded by inflation and individuals may effectively end up purchasing less for the same amount of income.

The CEBR estimate that household expenditure is £24.2 billion higher due to fuel duty being frozen. This equates to approximately 1.21% of total GDP. As such, the point on lost revenue made by the Treasury needs to be further caveated.

Now, we know the Government wants to balance the books. We agree with that aim. But the way they’re trying to do it doesn’t add up when it comes to fairness or economic common sense. The Chancellor maintains the long line of Ministers who have made UK drivers the highest taxed in the world, even after the latest continuing freeze.

Drivers are punished unnecessarily in the pocket, simply for going to work, attending hospital appointments, pursuing their education goals, social interaction, community care, visiting friends and loved ones or just going out for entertainment.

Why is it, the whole of the developed world puts lower fuel duty onto diesel and therefore derv is always cheaper than petrol? They, unlike here in the UK, recognise the commercial heartbeat of the economy is haulage and distribution. Our Treasury instead, sees all drivers as pure cash cows.

But before the myopic tree huggers attack us, as they frequently do, we asked the 66,000 ‘anti-hike in duty’ respondents in our survey, what ways they suggest the government should raise the promised extra NHS cash.

Despite this common sense from the electorate, it seems the Chancellor still wanted to hit hard the easiest of targets, the UK’s perennial scapegoats, drivers.

Our survey also revealed that Mr. Hammond is regarded as the most out-of-touch politician in the country, just above their detestation for the London Mayor.

It seems that at every turn, for motorists, van drivers, bike riders and truckers, there’s always agony along the financial highway for anyone who wants to use our third world underinvested road network.

On top of soaring oil and pump prices, seeing their treasured vehicles devalued overnight by emotive and dubious air quality claims, drivers will always be the ignorant politico’s target.

Not only is the Government’s continuing fiscal approach to road transport crass stupidity, it is also political suicide.
Will they ever listen to 83% of the electorate who drive?