Key Findings in a Pioneering Cebr Economic Report Sanctioned by the Fair Fuel APPG for Motorists and Hauliers, & Funded by FairFuelUK, ABD and MAG: 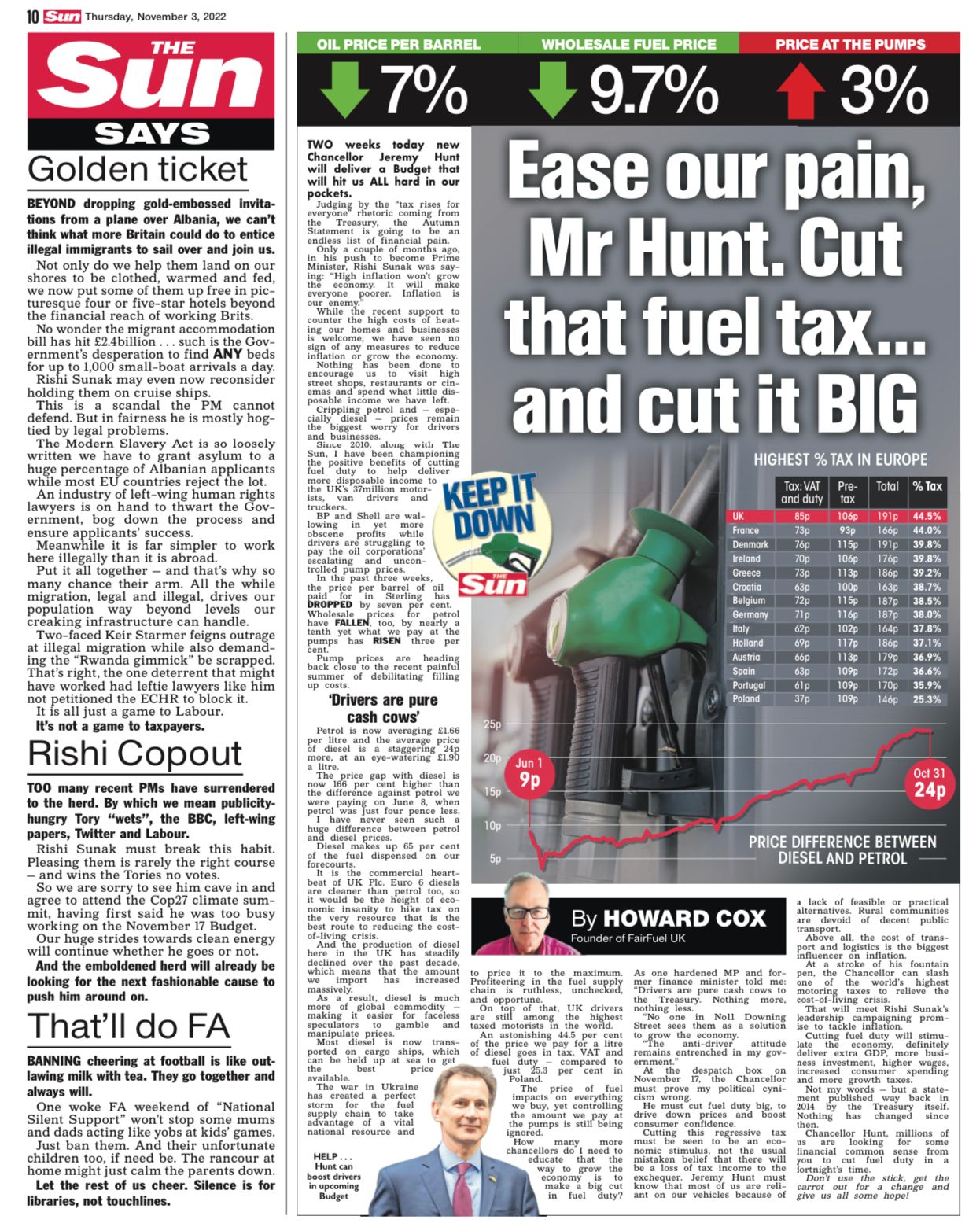 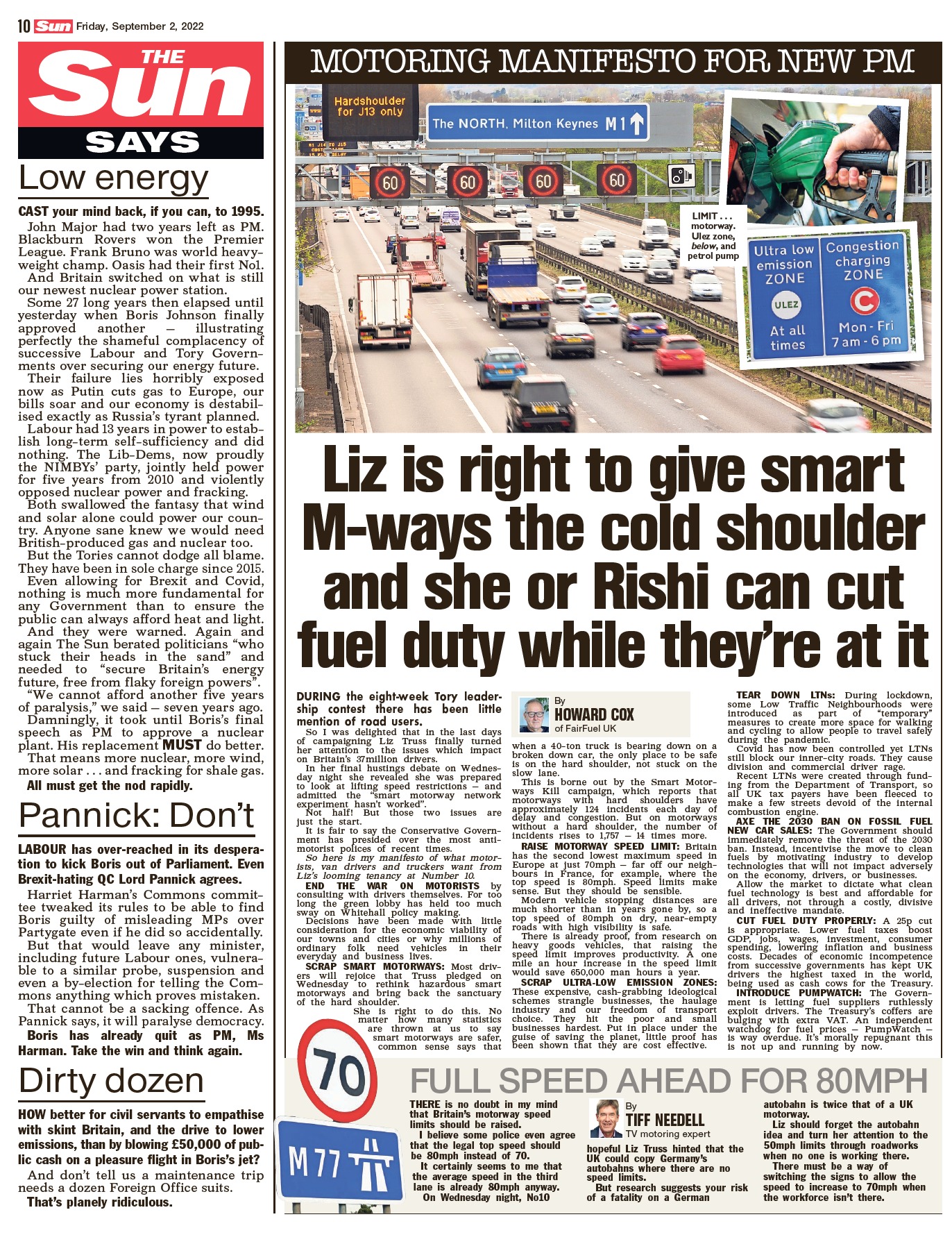 It is fair to say the Conservative Government has presided over the most anti-motorist polices of recent times.  So here is FairFuelUK's manifesto of what motorists, van drivers and truckers want from Liz Truss's tenancy at Number 10:

*AXE 2030 BAN ON FOSSIL FUEL NEW CAR SALES The government should immediately remove the threat of the 2030 ban. Instead, incentivise the move to clean fuels by motivating industry and entrepreneurs to develop technologies that will not impact adversely on the economy, drivers, or businesses. Allow the market to dictate what clean fuel technology is best and affordable for all drivers not through costly, divisive and ineffective mandate.

*INTRODUCE PUMPWATCH Government is still allowing the fuel supply chain to ruthlessly exploit UK’s drivers completely unchecked. The Treasury’s coffers are bulging at the seams with extra VAT. An independent watchdog for fuel prices PumpWatch – a - is way overdue. It's morally repugnant that this is not up and running by now.

*END THE WAR ON MOTORISTS by consulting with drivers themselves. For too long the green lobby has held too much sway on Whitehall policy making. Decisions have been made with little consideration for the economic viability of our towns and cities or why millions of ordinary folk need vehicles in their everyday and business lives.

*SCRAP SMART MOTORWAYS: Most drivers will rejoice that she pledged on Wednesday to rethink hazardous Smart Motorways and bring back the sanctuary of the hard shoulder. You are right to do this. No matter how many statistics are thrown at us to say Smart M-ways are safer, common sense says that when a 40-ton truck is bearing down on a broken down car, the only place to be safe is on the hard shoulder, not stuck on the slow lane.  This is borne out by the Smart Motorways Kill Campaign which reports that motorways with hard shoulders have approximately 124 incidents each day of delay and congestion.  But on motorways without a hard shoulder the number of incidents rises to 1757 – 14 times more.

*RAISE MOTORWAY SPEED LIMIT Britain has the second lowest maximum speed in Europe at just 113kmh – far off our neighbours in France, for example, where top speed is 130kmh. Speed limits make sense. But they should be sensible. Modern vehicle stopping distances are much shorter than in years gone by, so a top speed of 80mph on dry, near empty roads with high visibility is safe. There is already proof, from research with Heavy Goods Vehicles that raising the speed limit improves productivity. One mile an hour increase in the speed limit would save 650,000 man hours a year.

*SCRAP ULTRA-LOW EMISSION ZONES These expensive, cash- grabbing ideological schemes strangle businesses, the haulage industry, and our freedom of transport choice. They hit the poor and small businesses hardest. Put in place under the guise of saving the planet, little proof has been shown that they are cost effective.

*TEAR DOWN LTNs During lockdown, Low Traffic Neighbourhoods were introduced as part of ‘temporary’ measures to create more space for walking and cycling to allow people to travel safely during the pandemic. Covid has now been controlled yet LTNs still block our inner-city roads. They cause division and commercial driver rage. LTNs were created through funding from the Department of Transport, so all UK’s tax payers have been fleeced to make a few streets devoid of the internal combustion engine.

FairFuelUK is the Real Voice of UK's 37m Drivers

Please support our popular fig​ht for fairer fuel taxation, whatever type of fuelled vehicle you drive.

And to scrap the 2030 Ban on the sales of new diesel and petrol vehicles.

Since Jan 2011 if the planned Fuel Price Escalator had been in place, today, pump prices would now be between 70p to £1.20p per litre even higher.

FairFuelUK through objective campaigning and lobbying, has put £165bn back into the economy through supporting more consumer spending and increased business investment. 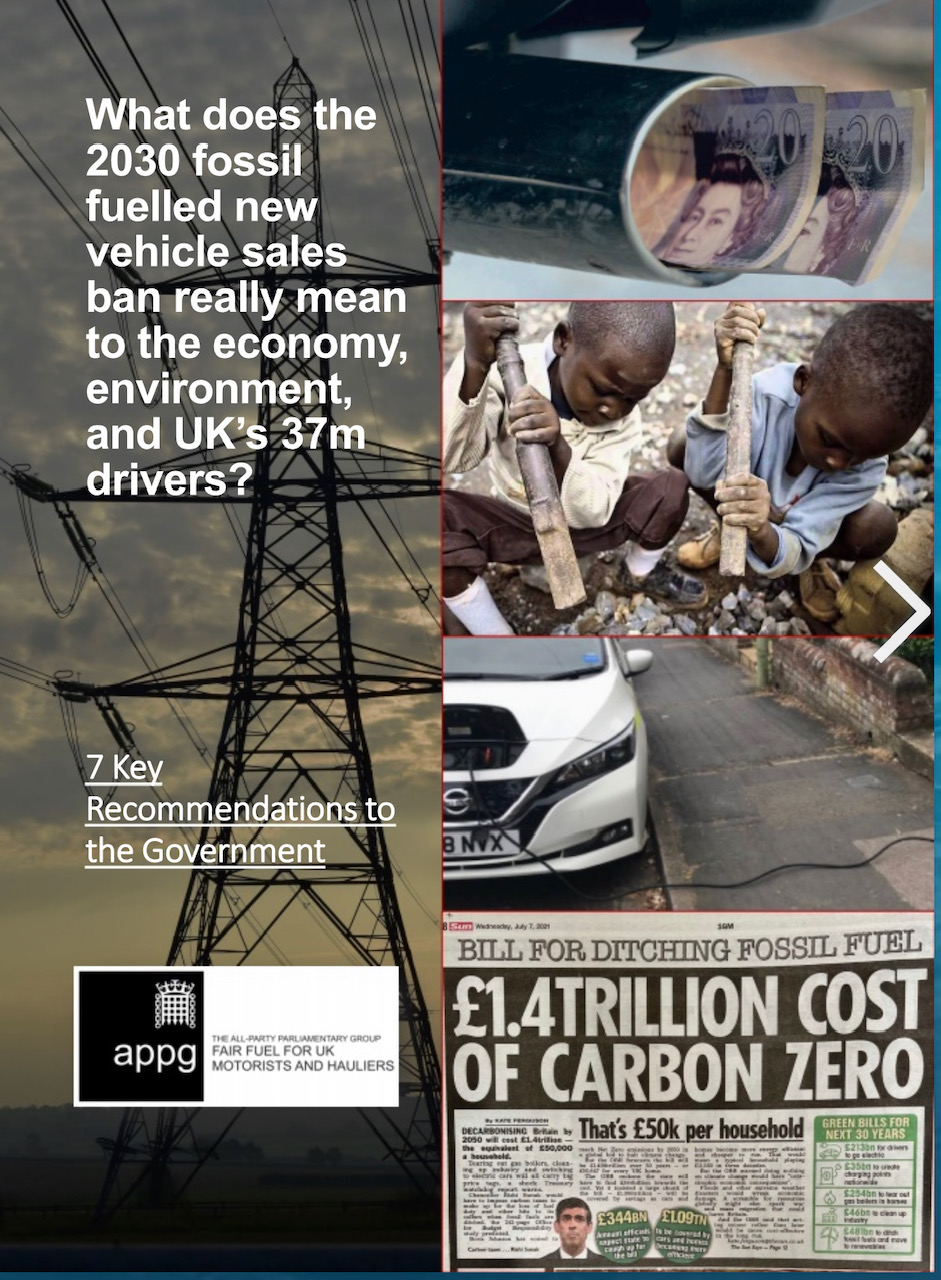 APPG Chair, Craig Mackinlay says: “The only thing that’s protecting the Government from electoral harm on this matter is the seeming Westminster consensus and lack of courage to stand up to the climate fanatics and say: enough!  Sooner or later the public will rebel against this madness. Better to have the rational debate now before we fully embark on a failing and expensive experiment.”

Sir John Redwood MP said: “There is a lot of common sense in the APPG Fair Fuel Report. Greener transport needs to work for the people it wishes to attract as users. You cannot get to work or run the children to school on a government target. Government needs to explain how these changes are going to be better, popular and affordable.”

Julian Knight MP said “This policy was wrong headed from the start, dreamt up in the kitchen diners of Notting hill, with no understanding of real people’s daily lives. It’s clear that the switch to electric will cause more environmental damage than running clean diesel. What’s more who is to say electric won’t be superseded soon making this whole costly charade a waste of time and money.”


Get A Copy of the Report

It's about time UK's drivers are treated more fairly...

That's why we urgently need your help, more than ever, now!